Disclaimer: As an avid reader, the books featured here are books that I enjoyed reading and want to share with others. If you would like your book featured here for a book review, please send an email to blaq_pearls@yahoo.com. 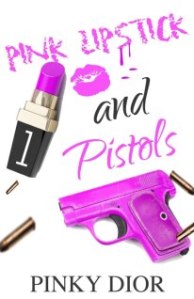 It is very rare that I am given the time to sit down and read a book because I am so busy with my own project. Since downloading the Kindle app on my phone, I have now found a way to fit in time for reading. My first official purchase on the Kindle was Pink Lipstick and Pistols, a short story by Pinky Dior. The initial reason I bought this book was because I wanted to support the author who I saw via Facebook was a young mother who displayed a high level of determination and ambition. In addition, I had read samples of the book and wanted to see how the story played out.

Pink Lipstick and Pistols tells the story of Milan, a beautiful, young woman who loves her pink lipstick just as much as she loves her boyfriend, Stakkz. Although not billed as such, the story could be considered as a Bonnie and Clyde tale. The story takes off with a bang immediately after the reader learns that Miss Milan has a pink pistol in her possession.

What sets this book apart from others that I have read is that the lead female character is the one displaying the most aggression while her male counterpart handles the majority of the “business.” I enjoyed that the roles were somewhat flipped because in most Urban Fiction titles, the male is the one with the most gunplay. I can honestly say that there is not a dull moment in this story. For young adult readers who love twists and turns, this is the read for you.

I commend Pinky Dior for writing an entertaining story and I hope you all get a chance to check it out. You can purchase a copy of Pink Lipstick and Pistols exclusively on Kindle for 2.99. If you do not have a Kindle, try downloading a Kindle app for free on your phone or your PC! Enjoy! 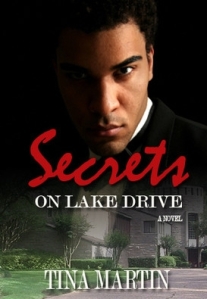 Secrets on Lake Drive by Tina Martin tells the story of Monica Smith, a school teacher, who is still feeling the effects of heartbreak from her first love, Cornelius. It is because of this relationship that she hasn’t fully allowed herself to love again. In her class, there is a boy named Roman who Monica has developed a special relationship with. His father is Sean Beauvais, a wealthy and handsome man (with memorable green eyes) who Monica meets for the first time at a parent-teacher conference. Instead of them having a “love at first sight” moment, Monica and Sean are involved in a slightly heated argument regarding Sean’s parenting skills with Roman.

After several run-ins with each other, Sean offers Monica a summer babysitting job. The gig comes with a nice paycheck and gives Monica the chance to spend quality time with her favorite student. Throughout the summer, Sean and Monica’s attraction for each other grows. There are several suspenseful incidents in the book, in which you will expect the unleashing of some very powerful secrets, which will leave you on the edge of your seat. Believe me; Monica and Sean both have a countless number of secrets that they’re hiding from each other.

Aside from the suspense, what I loved most about the book is that the writer gives you an in-depth look into Monica’s thoughts and emotions. Also, the book did not focus majorly on sex, but more on Monica and Sean’s transition from frienemies to soulmates. It was the perfect combination of romance and comedy. I highly recommend this book for anyone who is looking for a great read. 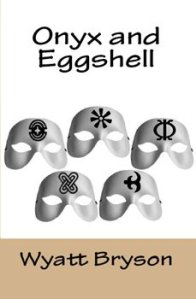 I think we all can agree that we judge books by their covers. If the cover does not catch your attention then you are less likely to book buy the book. I will be honest and say that when I first saw the book covers for Wyatt Bryson’s novels, Sankofa and Onyx and Eggshell, the idea of buying the books was miles away from my mind. It wasn’t until I actually read the synopses of the novels and learned the meaning behind the titles that I wanted to actually read the books.

The first book I bought was Onyx and Eggshell because it was focused on five girls pledging a sorority (Gamma Beta Alpha). As a member of Sigma Gamma Rho, my interest in this book was almost automatic. I haven’t read a lot of books which focus on Greek life so I definitely couldn’t wait to start this one. (Sidebar- the sorority’s official colors are onyx and eggshell hence the title of the book)

To begin, Onyx and Eggshell centers itself around five main characters, Sabina, Akia, Tammy, Luci and Chilli who attend Freedom College. The first thing I instantly loved about the characters was the fact that they were all noticeably different and every character had something that made you feel connected to them. As much as I would love to go into grave detail about each character, I won’t, because I don’t want to give away anything. There are a lot of things that come out in the novel about each of these characters, but giving away the goods is not my style. I will say this, though- out of the five characters, my favorite was Chilli. Despite her obstacles, Chilli always had sort of a calm demeanor about herself. It seemed as if certain things never got to her. I honestly felt that her name fit her to the T. However, towards the end of the book…things took a turn. Yep, a big surprise in the plot!

Although this book was about pledging, do not expect to read a story about five girls being hazed. Expect to receive more of a history lesson on Gamma Beta Alpha and how the organization embodies African traditions. It’s obvious that Mr. Bryson did his research with the amount of references to African culture that is in the book. As the characters receive their history lesson, please believe that you will be getting yours as well!

In the end, the point that I really want to make is this. Although we judge books by their covers, we really shouldn’t. Onyx and Eggshell is an example of that. I would definitely be missing out on a great story if I had let the cover discourage me from buying the book. I highly suggest that you look pass the cover and head directly to the pages!

If you have never heard of author Redsnapper, I highly suggest that you get acquainted with his work today.

Memoirs of a Creole Crime Cartel (MCCC) is the prequel to these novels, set in Kansas City, Missouri and follows the lives of Andrew Laurie, the ruthless Don of the infamous Creole Cartel, his daughter, the beautiful yet manipulative, Tangie Laurie, and her conniving grandmother, Suzette, affectionately referred to as Big Momma.

Not having read any of his previous novels, reading MCCC, set the tone for any other work that I may read by him. At first read, MCCC caught my attention. To be honest, as a lover of gangsters and stories of drug cartels, I was willing to buy and read the novel just based off the title and cover design. The novel did not disappoint at all, but there was more sex than I had imagined!

If you buy this book, which I hope you will, remember, I have warned you! It’s juicy! (Literally :-0)

Omegia Keeys’ Can You Keep a Secret?

The book follows the life of Monica Taylor, a successful Human Resources Manager at People’s Insurance who discovers her husband’s infidelity. Instead of waltzing around the house like a sad puppy, Monica decides to take matters into her own hands and spice up her sex life (and boy, does she!)

When I first started reading the book, my mind eventually went to the movie, Waiting to Exhale where I relived the memory of good ‘ol Bernadine. The only difference is, I’ve never read Waiting to Exhale. In CYKAS, Omegia does an EXCELLENT job of describing Monica’s thoughts and emotions, almost to the point that you think you’re walking around in the woman’s head yourself. The story is written in first person, which aids in the reading experience.

The one thing I noticed about Monica’s thoughts is that they are honest and real. Monica is an excellent representation of the working mother in America. Yeah, yeah, I’m not a mother, but with the way this book is written, I could relate!

Oh yeah, Omegia definitely didn’t hold back on the nastiness. This book definitely ain’t for the kiddies.