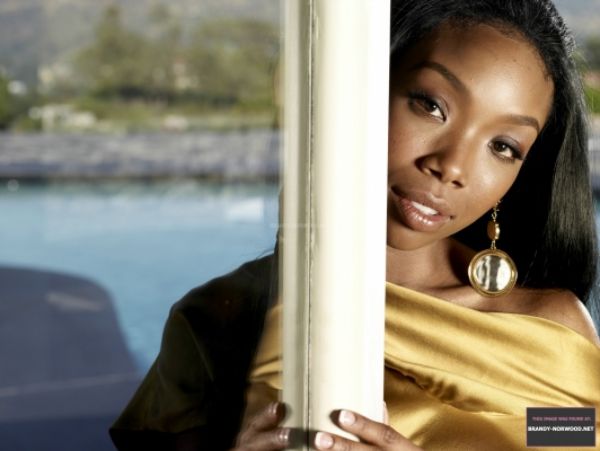 Honey Magazine: Ray J was once referred to as ‘Brandy’s little brother.’ In the past he was in your shadow. Have the tables turned?
Brandy: Have the tables turned? I don’t think that. I think that Ray just found his own way. He found what he loves to do and I’m so proud of him. It’s so funny because when he was known as my little brother, I couldn’t really enjoy my success because I wanted him to have it. So for him to have it—to come out of the shadow and have his own name and have his own thing going on… it makes me proud. I’m just glad that he even wanted to do a reality show with me and our family. He could do For The Love of Ray J 3. I was excited when he came to us about Family Business. Although very hesitant and scared about it, I thought that was cool that he thought of that.

Is their tension with your mom being your manager?
Theirs a lot of tension because you know its not your typical management, it’s your mother managing you. So there are moments where she’s not switching acts. And it’s, ‘well I don’t work for y’all. I work with y’all.’ We have grown up with it. We understand it. I have more of a struggle with it because I’m a girl.

On the show you and Ray J are working together. Is it easy to work with him?
It’s fun to be partners with Ray. He’s so business savvy. He’s into dreaming big and making things happen. It’s great to have a partner like that. We work well together. I’m just a little more emotional than he is.

Is there ever drama or tension between you two?
Everybody knows that we are very, very close. Closer than close. It’s irritating because people can’t get any dirt on me and Ray from each other. We are very close.

Are you saying you never argue?
One of the moments you see in the show I tell my brother don’t “Ray J” me! That really hurt my feelings so I don’t like for us to have any tension in that area because we never have. When there is ego involved I learned to separate what that is. I’ll forever be getting my feelings hurt if I put my emotions into business. That is something I struggle with because everything is a personal moment with me. Its all personal for me.

Did you support Ray J doing For the Love of Ray J?
I just don’t think that you can’t find love that way. I never thought that. I wasn’t supportive in that, ‘oh yeah this is it, you’re going to find the love of your life.’ But I told him, ‘you’re not going to find love like that. If you’re looking for love, that’s the wrong way to go about it.’

Was For The Love of Ray J real? Was he really looking for love?
I think he was just looking for someone he could hang out with, be friends with. I don’t think that he truly believes that he could truly find love that way.

Do you think marriage or a serious relationship is in Ray’s future?
He’s young and he lives it up. You just got to let him do it. One day he’ll realize that he’s going to get tired of all that and he’s going to want to settle down. I don’t know how soon that’s going to be. He’ll get there, though.

What’s going in your love life?
Honestly, I’m just trying to stay loving myself. I’m really scared to give my heart to somebody. I have friends but I’m not serious with anybody yet.

It’s been said that you’re dating Flo’rida. Is that true?
I don’t want to say it’s not true. He’s definitely someone in my life that I hang out with from time to time. I think he’s cute and all that. I’m in a place where I just want to make sure I’m right before I get serious with anybody. But I definitely have my eye on Flo’rida.

We see you and Kelly Rowland together a lot. Are you good friends?
Kelly’s my best friend. We are born on the same day. I love her, she’s amazing. Kelly and I were friends back in the day and we then separated and went our own way. She’s the friend that I prayed for and said, ‘Please God, give me another chance with her.’ She’s just a great friend. And God did. We are back in each others lives. I love being around her. I call her my twin. It’s a very special relationship and I just don’t want to ever lose her again.

Did something happen between you and Kelly before?
We were not friends for a while—for dumb reasons. Young, dumb reasons. I just never want that to be again. It was through the adolescent years, when we were very young. I really didn’t know how to be the friend that I am now. I didn’t know what I was doing. I’m a great friend now. I’m just happy to have her back in my life.

You, Kelly, and Serena have a celeb entourage. Are you all really friends?
Serena is a good friend of mine, as well. We just happen to be celebrities. We really have a connection. I have met a lot of famous people that I just don’t connect with, not with them though. Those are really my only two celebrity friends.

You and Kim Kardashian were friends also. Were you there for Kim during the sex tape scandal?
It’s not that I didn’t want to be there. It’s one of those things where that person has to call on you for support and that didn’t happen because they were dealing with their own thing individually. [Ray J] just did his own thing to get over it and she did the same thing.

Are you and Kim K still friends?
I still have a lot of love for Kim to this day. If Kim ever needed me for anything, I would be right there for her. She was a very close friend of mine. You know people fall apart and sometimes that happens. But she’s another one that if she ever needed me I would definitely be there. Once you care about somebody—once you love somebody, you’re not just not going to think about them no more. It’s very difficult. I’m open to forgiveness and moving passed stuff.

We also see you photographed with your daughter often. How is motherhood?
She is the best thing that ever happened to me. She’s seven years old now. I’m a different person while she’s around. I’m a hero when she’s around and I love to feel like that. She keeps me on my toes. The way I speak to her, is that she can be completely open with me. That’s my girl.

How is uncle Ray J with your daughter?
She loves uncle Ray J. He creates great moments with her. She doesn’t get to see him as much because he works all the time. Whenever he can see her, he creates memories with her. He’ll throw a cute little slumber party for her and her friends. He does things like that. He really goes out of his way to make sure she has a lot of fun.

What made you start your You Tube series singing acapella in the bathroom?
I always sing in the bathroom. It’s the best place to sing besides the studio. I recorded myself singing, Somewhere Over the Rainbow” on my Mac computer. I played it for some of my friends. They were like, ‘Oh my God—get you a YouTube channel.’ I posted on my Twitter and my YouTube channel. They went crazy.

Who is Bran’ Nu?
Bran’Nu is the boy version of me. It’s a hobby. Rapping is a hobby for me. It’s another way to express myself, creatively. Timbaland heard about it and wanted to feature me on his new album, which I was really excited about because I never thought I would do it professionally. I like becoming that side of myself. It’s kind of tough, it’s kind of bitchy. I love that because I’m not that on a normal basis. I’m a cry baby. The other side of me is raw and like, “you got something to say to me? You got something to say to me? Say it to my face.” That’s who Bran’Nu is, not Brandy.

Who would you compare Bran’Nu to?
I’m not like anybody. I’m just me. But I really like Nicki Minaj though. I like her a lot! Not to compare me to her at all. That’s Bran’Nu’s favorite rapper, besides herself.

You were a part of the Haiti “We Are the World” special. What was that like?
It was just a great experience to be around all of those incredible artists, to be a part of something as historical as that, and to give back to Haiti.

Do you have any great stories from the recording process?
Tyrese kept messing up on his part and they kept saying there was a mistake in the room. It was Tyrese the whole time and nobody wanted to tell on him. Trey Songz and I were all laughing at Tyrese and his mistake. He was singing on the girls part while the men were supposed to be quiet. It’s funny. But it was a good day. Oh and Justin Bieber went out of his way to speak to me. So I told my daughter. She was like, ‘Well mom what did you say to him?’ I said, ‘Mama didn’t even know who he was baby.’

What is R&B Productions?
It stands for Ray J and Brandy productions. We are building a company together and branding ourselves as a brother and sister team. A lot of things come under that umbrella. The show, Family Business, is under R&B Productions.