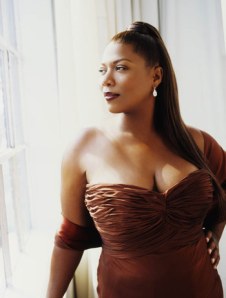 Check out this interview/article with Queen Latifah, straight from parade.com:

“I didn’t even see the damn glass ceiling. I just pushed up through it. I was the type of girl who fell on my face early. I learned how it felt to get rejected and get back up and dust myself off. I knew what it was to give it your all and find a way to work through it,” Latifah says.

Queen Latifah loves basketball, a sport that taught her how to play the game of life. Now, in Just Wright, the die-hard New York Nets fan gets to cheer for her favorite team and fall in love with the star player (played by rapper Common, in his first leading romantic role).

Latifah remembers the downside of growing up on the court. “I didn’t even know what a ‘tomboy’ was until people started calling me that,” she says. “I was like, ‘I’m not a boy.’ But I was a fighter. So it didn’t matter what they called me, I was always gonna kick butt and take names. My mom was very supportive and she said, ‘You’re not a tomboy. You’re just sports inclined.’

Helping Common live up to his hunky image.
“There were certain scenes where I was like, ‘Man, you’re that dude. Girls throw their selves all over you. Be that dude!’ Sometimes I would just pump him up, like gas, because he’s so humble. I’m like, man, ‘F that! You can turn back to that other guy after we finish filming.'”   SN: If I could’ve, I would’ve been right there amping up Common to. Does anyone remember his Gap ad when he’s lifting up his shirt? Oooh la la!

As for their moment of on-screen passion.
“That’s what the movie is all about. It’s all about me having the opportunity to be in bed with Common. I mean, what’s this all for if I can’t hook that up? No, I’m just kidding. But it’s not a bad day of work. I just want everybody to know that we didn’t go for an R-rating.”

Sexy is in the eye of the beholder.
“I’ve always believed it’s not always what you look like, it’s who you are on the inside. Beauty from the inside out is something that I can connect with because that’s where you get your integrity and confidence.” SN: True statement. You can be the prettiest woman in the world, but if you don’t have a personality, what good is beauty?