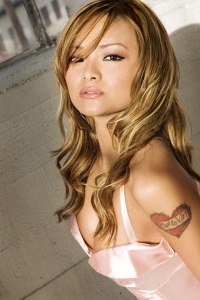 While I was doing my quick browse through the net, I saw this headline about Tila Tequila supposedly giving Amber Rose some advice on how to keep her name ringing (she did this through a post on her blog site, misstilaomg.com).  Nicki Minaj once said in a rhyme, “step your cookies up before they crumble,” and I guess this is the message that Tila is trying to spread to Amber. check out the blog post straight from misstilaomg.com…btw, VSN means Vogue Side Note.

Okay… for the record.. I got mad love for my girl Amber Rose. VSN: Wow, and this is the first thing you say right before you GO in on her! We met last summer at P. Diddy’s “WHITE PARTY” and she’s a pretty down ass ghetto chick from Philly, which I love! Shit — I’m a down-ass-ghetto-chic from Houston myself!! However as a Gossip Blogger, I cannot be bias just cuz someone is my “FRIEND” I must report my unbiased opinion no matter how messed up it may seem! (that’s what’s missing in the blog world today anyway right?!) VSN: Well, you are going to be bias if their your friend unless you really feel that their starlight is fading. However, as a friend, you would probably tell them to their face or over the phone instead of putting it on the internet for the whole world to see. Now, people are looking for some rebuttal from Amber unless you’ve already explained to her that this is way to garner more ppl to your blog. I’ll be honest, I didn’t even know Tila had her own blog site until this story broke–I thought I stayed in the KNOW!

My question is – is Amber Rose starting to loose her PEDALS? I remember when she first stepped out with Kanye West a while ago, she was in EVERY tabloid, and EVERY magazine! However in 2010, you don’t hear much about Amber Rose anymore. Does anyone care about her anymore???? Has her height of fame reached it’s peak?? VSN: I care about Amber Rose, however, I want to hear about her in a positive light with the latest endorsements she’s doing or modeling projects instead of some drama. I think she’s going to be around for a long time and I’m not being bias because she’s dating kanYe (who I absolutely adore) and guess what…I don’t know her from Adam so I’m not saying this because she’s a friend!

I don’t know, but me personally, I haven’t heard much about her in the tabloids. I think her haydays are about to be over if she doesn’t do something quick! VSN: The last thing I remember hearing about Tila is that she was on Twitter talking about Game being her baby’s father and he went straight to TMZ to clean up that rumor. Then, these recent pics of her blonde hair caught my eye. I mean kiss a girl in public, slap Yeezy, proclaim your love for Oprah! Anything, if this is the game you want to play, play it like a Kardashian (well, you don’t have to be that desperate!)

I also think she looks like she gained a bit of weight in this pic. Maybe she can be in “Precious 2″ or “Celebrity Fit Club” I’m just throwing some ideas around. LOL! VSN: Even if Amber gained 20 lbs, shoot, she probably still be in shape, maybe not by industry standards because according to one supermodel, you’re considered plus size if you’re an 8 in the modeling biz- dayumms! But for realz, this is a pic of her taken while shopping on Roberston Blvd. in Los Angeles. I mean, Amber Rose was always known for her thick and sexy body, but right now, I think she has gained some weight. Hmmmm…maybe Kanye has something to do with it? Everyone is saying that he is unable to share the spotlight with anyone … and Amber used to be the one the paparazzi would go gaga over … now it’s actually Lady Gaga! Maybe he reeled her in and let her know she was arm candy only!

Anyway, that’s just my opinion. Amber, you still my girl, but milk it as much as you can while you’re still here, cuz in the Hollywood world, one minute you’re hot shit, and the next, they don’t even remember your name. So my advice to you? Start up a business, start a perfume line, pitch a tv show, or DO SOMETHING aside from just being Kanye’s girl. Word is your ass needs more media training … get some! Date Reggie Bush, he’s single now and more man than Kanyeezy will evah be! Or HOLLA AT ME BIATCH!

Yeah I took a shot at you Amber, but for your own good!

PS- So what do you guys think? Amber Rose fading from spotlight or still hot? Is she better off with or without Kanye? And do you agree with me that she should Milk it while she’s still hot??? What is YOUR opinions on this? Has she gained weight?????