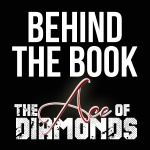 Chapter Fifteen
I didn’t want to skip this chapter, but after reading it, there wasn’t anything in it to really dissect. Therefore moving along to Chapter Sixteen…

Chapter Sixteen
1. Jay fired a shot, intending to miss. However, he got what he wanted, a flash of fear appeared in Blu’s eyes. He even turned around to stare at the bullet hole in the center of the wall. – Even to this day, I wonder if Jay made a mistake by not killing Blu in this scene. Then, I think to myself, if he had of killed him, there wouldn’t have been nearly as great of a plot as there is in Black Diamonds. The only person left to try and go after Jay would’ve been Jerome.
2. He left shortly after, going to the county jail where King was serving out his sentence. – This scene was written on purpose. Although King is incarcerated at the start of the novel, he still needed to have a presence so I came up with the idea to have Malik visit him in jail.